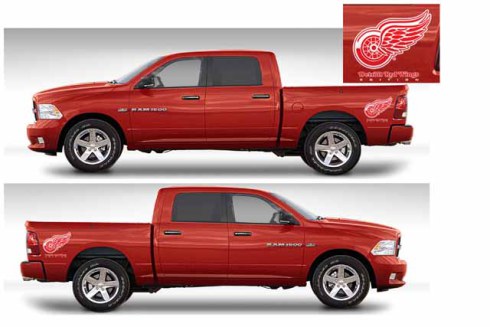 When something succeeds, it only makes sense to keep doing that. In this case, Ram put out a special edition Red Wings variant of the 1500. The truck sold well, very well in fact, selling 3,000 units since it was put on sale in November of 2011. That’s three times the expected amount. The success has gotten the collective heads of Chrysler and Ram thinking, what other hockey teams and cities would this work out for?

Business Week spoke with Fred Diaz, the head of Ram, at the New York Auto Show. He had this to say about the idea of expanding the 1500 for different teams, “It’s actually an experiment that we did with Detroit and it work out so incredibly well, we’re looking at the possibility of doing other things with others sports,” he said. “You have to have a rabid fan base. Then you have to get the rights. We’ve got our feelers out to see what could work.”

The Red Wing 1500 is a $399 option that comes in red, white, or black and has the team’s logo on the headrests of the front-seat. Ram didn’t offer the option this year due to the season being cut short because of the labor dispute, but fully expects to offer it again when the next season begins.

What hockey teams would you like to see Ram have an option for?